How Does Real Inbound Marketing Work?

So we are at a point where this has become a major question for Trackland.  In the past you needed a blog.  I knew that much.  But as the internet has evolved over the last decade, we now have social media, question boards, video, and of course blogging is still incredibly important.  Understanding what each platform does is not the equivalent of knowing what to publish to each platform and how that will help us.  As I was trying to create my own inbound marketing strategy for Trackland I realized I needed to understand the following three things:
Hubspot is the best at having a cohesive strategy and sticking to that strategy.  I started working through Hubspot’s six hour “Inbound” marketing certification course over the last couple weeks.  As I did I started to understand the inbound strategy better. Different channels are a way for you to 1) provide content to the community, 2) engage with people in the community, and 3) educate people about the content you have provided.  In essence, you put in a lot of effort to be a contributing resource in the community you seek to influence. It requires a lot of time, content and consistency.  To do that, I knew I was going to need a solid tool set to help me.
Trackland is focused on building the “how” tools.  We use Salesforce as a starting place, and between configurations to Salesforce, and our own development we try and build things that really help small businesses succeed.   Naturally, I wanted to build tools to help me sustain my in bound marketing efforts.  An instructor in the in the Hubspot video training showed spreadsheets he used to build out a really useful content creation strategy management system.  As I watched him do this, I knew I had to build objects in Salesforce that I could access through Trackland to help me track the same thing.  The posts in this series will document the tools I built for Trackland to use in our efforts to create and sustain an inbound marketing and content strategy.

About three weeks ago I finally jumped into writing blog posts.  I knew I needed to just get started, so I jumped in and started writing. Each post took me about 3 hours to write.  I just picked something out of the air that I was currently thinking about and I started writing.  I realized immediately how unfocused I was, and that I would probably not end up being very effective. At a minimum such a spontaneous approach would become very difficult to maintain.  That is when I began watching the Inbound Marketing training on Hubspot (and why I quit writing blog posts for two weeks).  I realized I needed tackle the concept of Topic Clusters.
The easiest way to build a topic cluster is using diagraming software.  I use a professional design tool called Omni Graffle, but Lucid Chart would do a great job of this.  When I started, I struggled to identify my “base” concepts.  I started pulling the main concepts out of the four posts I had already written about.
A couple things happened as I started to list things out this way.  First, I realized I was not naming my articles very well.  Second, I started to see how these topics traced back to my base concepts.  You can see how the Topic Focus from the table above mapped back in one or two steps to a base concept.  I knew it was a base concept when I realized how general the concept was and that I would never really write a post directly about that topic because of how general it was.
Three out of the four initial blogposts had mapped back to a similar general idea and helped me define CRM Adoption & Mechanics category.  This is not incredibly surprising because we are a Salesforce specialist helping with adoption and implementation.  We only talked about our own product for 1 of 4 posts which was intentional, but we completely missed something we do really well which is help people design their customer journey.  My three primary or general areas were defined as follows:
Once I had my general area topics, adding additional pillar topics and then categories and sub categories was really easy.  Though it will always be a work in progress, the topic cluster map began to take shape like so: 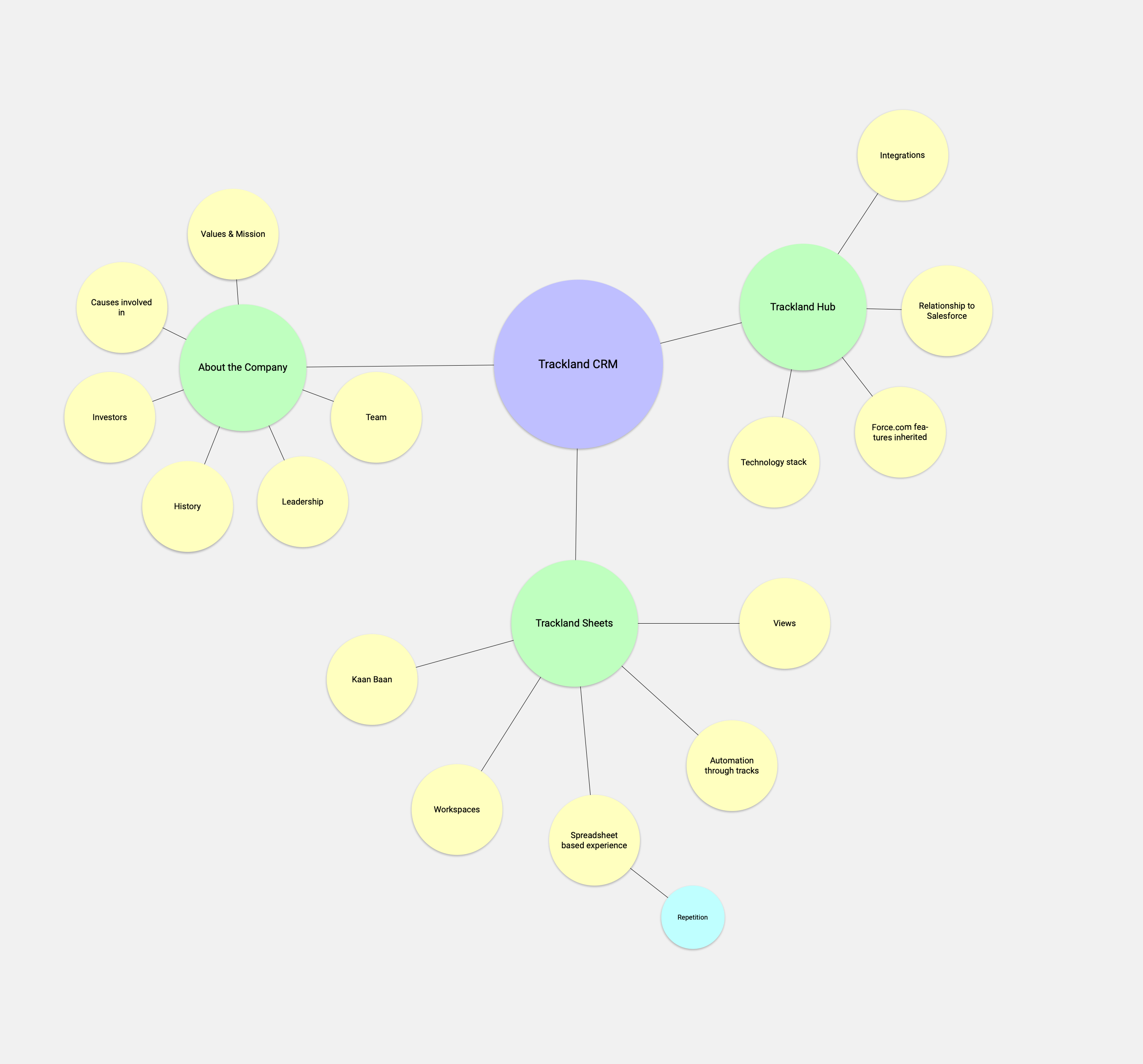 A side benefit was my ability to better articulate what it was that Trackland offered both in terms of service and tools. My next step was to create this in Salesforce.  Anytime you are creating custom object structures in Salesforce, defining relationships correctly is critical.  Relationships get created in one of two ways.  1) As a record referencing another record (can be same or different object types) or 2) as a record selecting an option from a pick list.   I could create a single ObjectType and have the three General Areas as records, and the Pillar Areas could reference the General Areas as a parent.  The Pillar Areas would then be referenced by categories and sub categories.  I figured four levels was plenty.  But would I really ever dedicate a page on my blog to one of the General Areas?  Maybe, but most likely I would only go back as far as the Pillar Areas to make Pillar pages.  I absolutely would never write a post and assign it strictly to the General Area, so why make a record for it. What I want is a way to use it as a bucket.  So instead, the General Area would be a picklist in Salesforce.

Once I had the General Areas picklist I could create the Topic object in Salesforce.

This object will be critical to the way we pull reports on our content.  Using the picklist we will be able to divide posts at one level, and then using the Pillar topics at the next level down.  Hopefully within a couple months I will be able to see where I focus most of my writing, and which topics tend to get more interest.

With the Topic object built, I could now create a Content object that would be used to track each piece of content individually.  The Content object will memorialize every WordPress post and eventually Medium post, tweet on Twitter, LinkedIn post, and video I eventually make.  So we need to make a pretty versatile object type.  To define the platform that the content piece will be posted to, I created another global picklist.  I know it will be used later in the content compass (which I will write about later) and I want to be able to add to the list of options and have it update everywhere.   I also added a post date and Topic field as a special lookup field called a Master Detail field.  Now I can go back to the topic and do a rollup summary of posts that reference this. 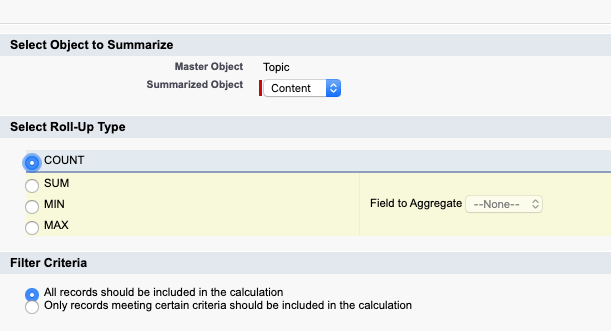 With the posts syncing from WordPress to Salesforce, I could now log into Trackland Sheets as an easy way to view the posts and an accompanying report that will eventually show many topics and the trends of which topics I write the most about.  I still have to build a structure to plan the content for months and quarters which is often referred to as a Content Compass.  Then I will need to build the reports, and potentially another object to perform Content Audits against goals.  I really love building tools to help me execute the strategies and achieve the goals I set for myself.  I hope this was interesting if you read to this point.  Look for the next posts in this series, and let us know if you want to checkout Trackland. 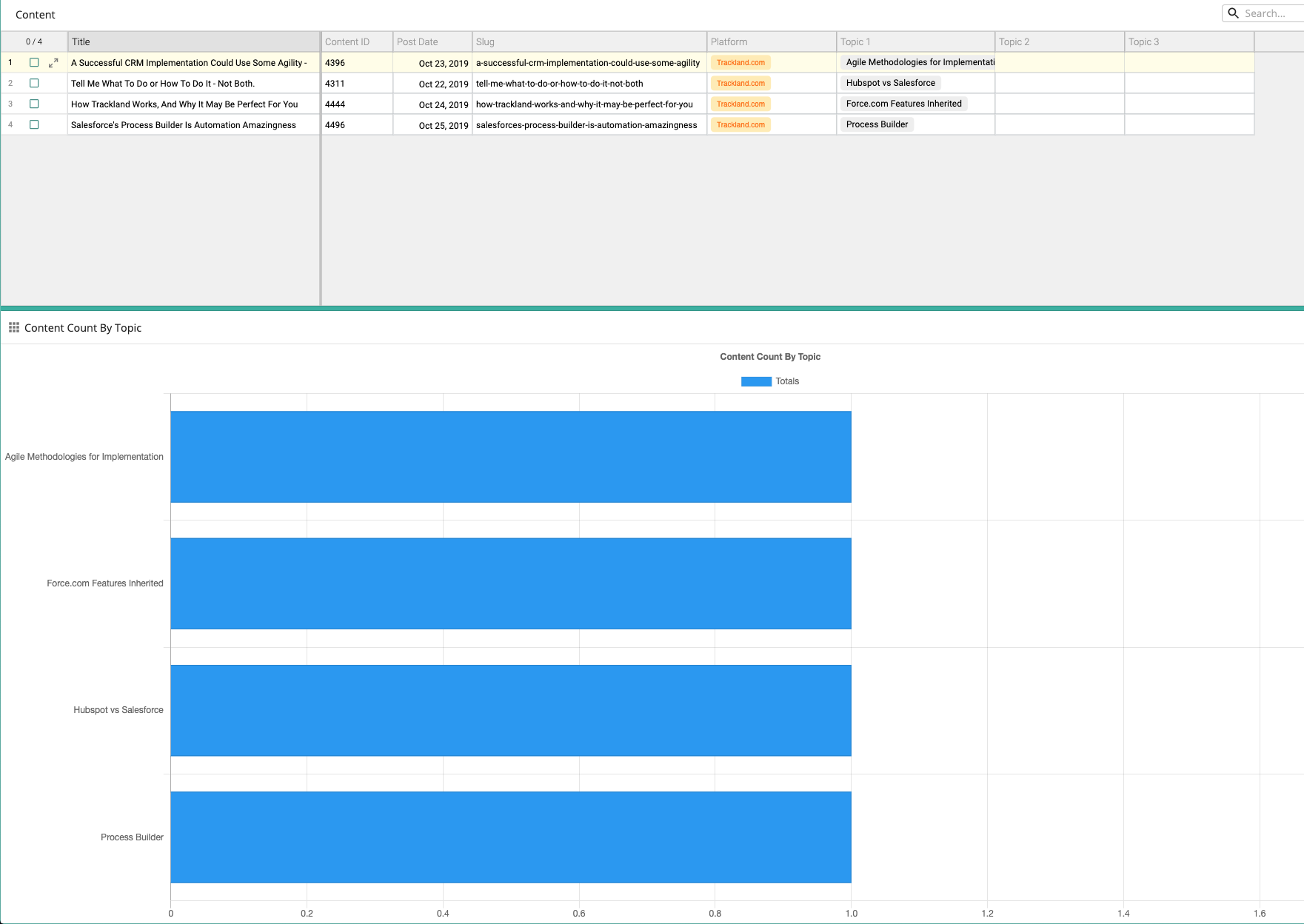